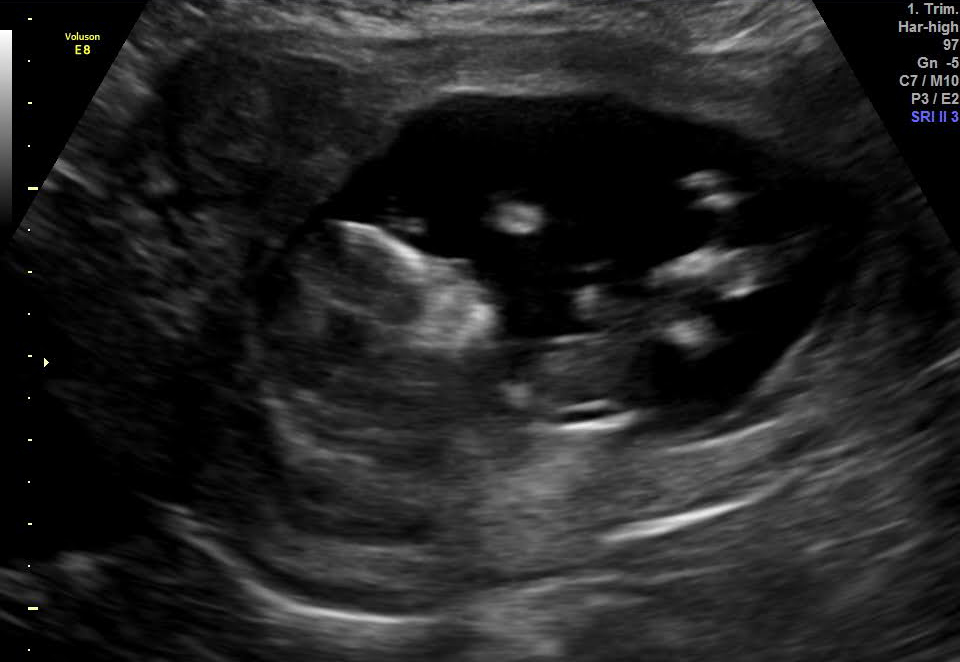 I mentioned in my last post that we’re expecting a baby in August. (Surprise!) Except it turns out, I was slightly wrong.

On Saturday, we had an appointment with Pink or Blue 4D Ultrasound Studio. We plan (if all goes well) to have another home birth with this baby, so normally that would mean no sonogram photos. With Myles, we went to a regular OBGYN till about 20 weeks, then switched to a home birth midwife, so we did have a couple sonograms with him. With this baby, we’re starting with a midwife from the beginning.

I suspected I was farther along than what my due date calculated out to be (August 3), just based on the way I’ve been feeling. Myles was born 5 weeks early, and if this baby comes that early, we won’t be able to stay home, so it was important to me to have a more accurate due date. We also found out that Pink or Blue does blood draws for the Sneak Peek early gender determination test, so that was one more reason we wanted to go. (Personally, part of me wanted to be surprised, but Mike felt extremely strongly about finding out the gender as early as possible … and I pick my battles, haha.)

We had an absolutely fantastic time at the ultrasound studio. The setup of the studio is fantastic. Instead of a little monitor to view the images, there’s a big projection screen and a couch for the family to sit comfortably and view. The woman that runs it is so sweet, and took lots of time with us. Myles was able to come with us too, and it was really special to have my “baby” get to meet my second baby for the first time. From my position, I couldn’t see his face, but Mike said his little jaw dropped and he was totally awestruck when the baby popped up on the screen.

When I asked about taking measurements to see if my due date seemed right, she agreed that the baby looked bigger/older than 11 weeks. She took several sets of measurements and averaged them to come up with an adjusted due date of July 23.

I was super happy to hear I’d have two fewer weeks of summer heat to suffer through when I’m very pregnant and ready to pop. I also realized that means I’m already at the end of the first trimester (13 weeks), which is also a huge relief. This pregnancy has been harder on me than the first in terms of exhaustion and nausea (though no vomiting, mercifully), so I’m glad to be going into my second trimester when those things usually subside.

I had my blood drawn and the sample goes to the lab (west coast) this week. We should have results Friday night or Saturday. So of course, we’re anxiously waiting! Any guesses?